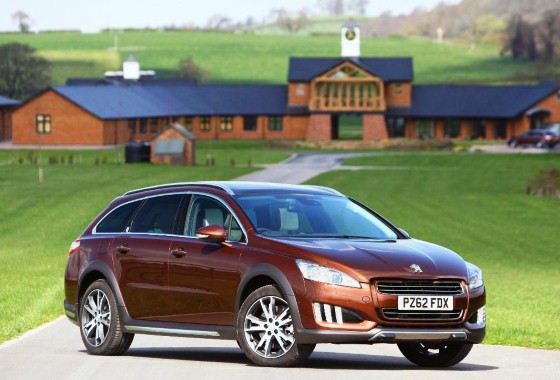 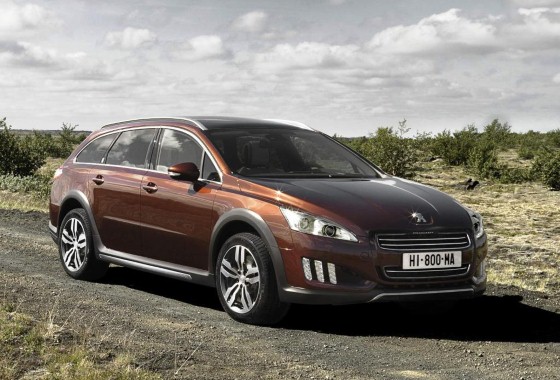 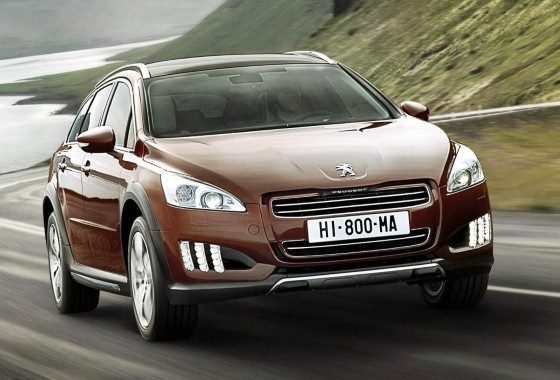 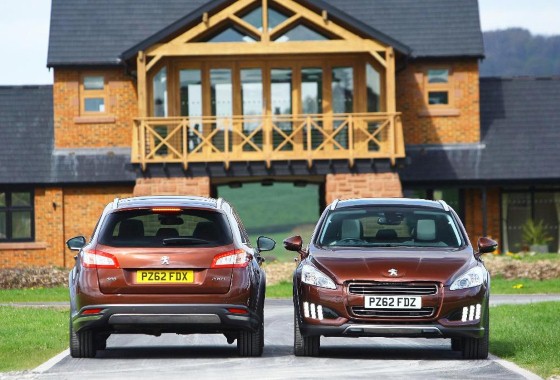 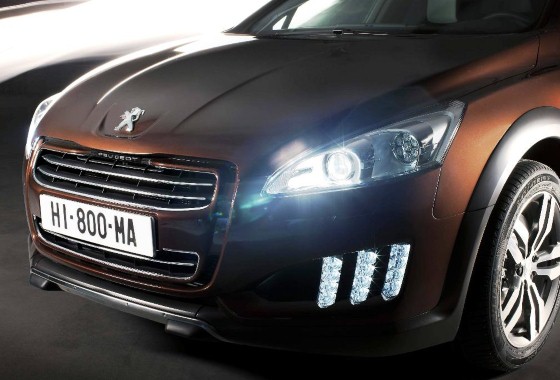 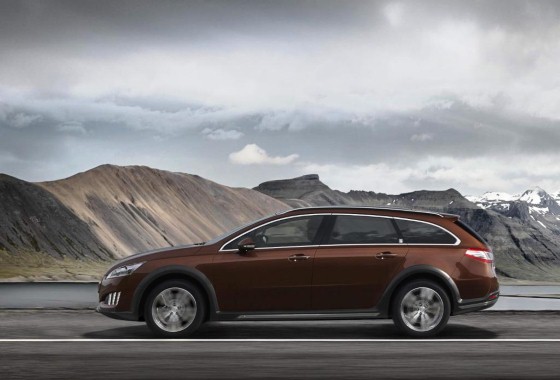 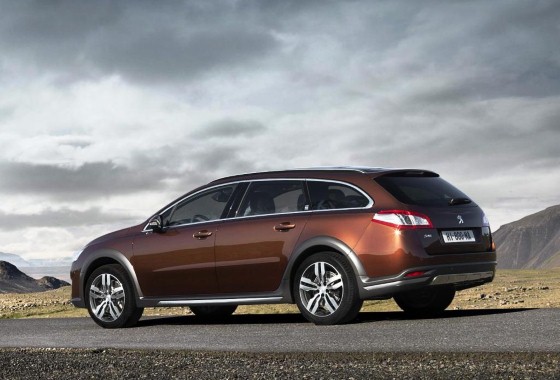 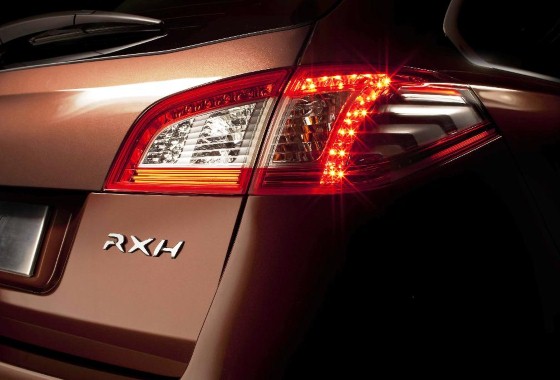 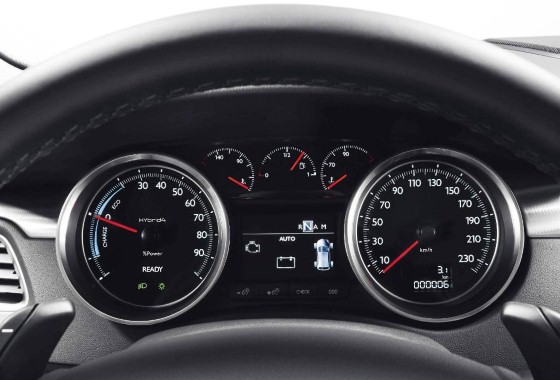 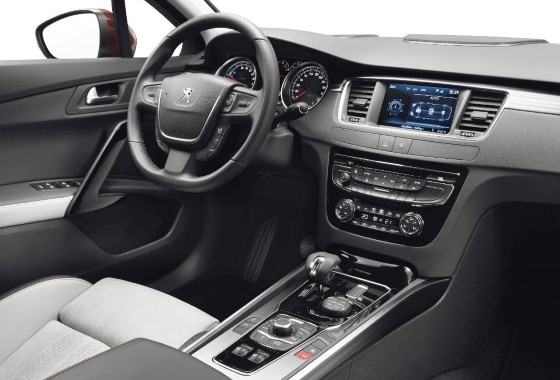 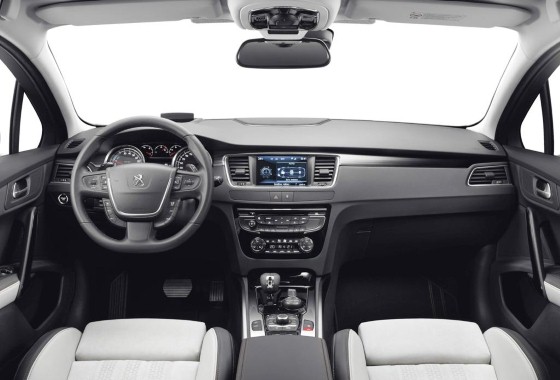 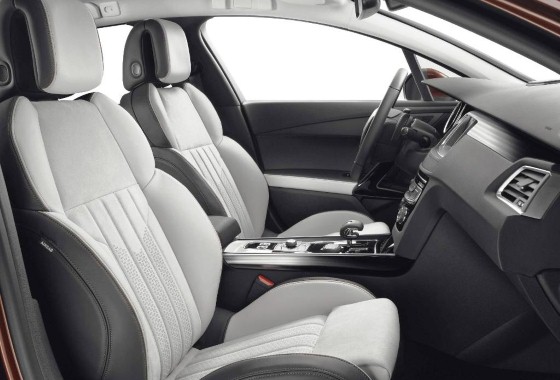 At around half the business car tax price of a diesel estate car of similar size and power, the summer-launched Peugeot 508 RXH hybrid is expected to be around 90% business-buyer-owned – those attracted by its strong benefit-in-kind taxation performance, thanks to a lowly CO2 output of 107g/km. So, the other 10% could be consumers looking for a minimal road tax burden (£20 per year; first year free), all-wheel drive grip and a quoted combined economy of 68.9mpg.

At £33,695 for this copper metallic RXH – this paint is a £550 option – this taller (by 50mm), all-wheel drive 508 estate is certainly nipping into the realms of the more pricy premium segment of the new car market. So, critical is its comfort and standard toys, as is a very solid economy performance. We put it to the test over a 1-week, 300-mile test drive with plenty of stop-and-start commuting, motorway cruising and around-towning.

First impressions:
It’s a big ‘n’ bold beastie this RXH; made taller and tougher by raised suspension and rough-stuff-ready black plastic wheel arch trims and front and rear bash plates. The size of an estate car then, but with some taller, SUV intentions, and in this metallic copper paint it certainly makes splash.

This, the latest Peugeot design style, is lead by a new front grille style with metal detailing, and a double helping of those ‘lion-claw-slash’ LED daytime driving lights. The rear end is dominated by bright LED taillights, and the general height and width of this full-bodied full-sizer.

I think the overall feel of the exterior style is pretty classy – £550-worth of cool copper paint certainly helps, as do the intricate, black highlighted 18-inch alloys wheels. I also found a solid look and feel of things as I approached the parked RXH, and tugged on handles and latches. And this is to be expected at well over £30k.

Into the interior:
Again, at pretty big money for this 508 hybrid, we’ll be expecting some interior treats, and, thankfully, the overall impression from inside the RXH is one of quality.

The fit and finish is good and a quick glance at the dash and centre console reveals a large colour screen, sat-nav, digital climate control and premium audio. Indeed, as buttons, dials and switches go, the RXH has a full complement.

Instead of a rev counter we get a ‘power metre’ – reading up to 100% – which also informs as to how well you’re doing on the economy front. Braking charges the big battery pack; flooring the gas demands 100% power and eats into the economy. Basically, using the metre as a reminder to caress the power-pedal gets best economy.

Next to the power metre is another, smaller colour screen that reads out for mpg etc and tells you where the power is going to and coming from, through the ‘Hybrid4’ drivetrain system.

The screens and dials all look cool, crisp and modern, and it’s a bit of motorway fun to see what the power system is doing through flowing graphics. My only complaint would be the power dial that looks very similar to the speedo; sometimes causing speed confusion. But, there is a natty head-up display that projects speed and sat-nav info on a small screen much closer to the eye line than the actual speedo. So I quickly learnt to refer here for miles-per-hour.

The Alcantara and leather seating in this test car is a £1,150 option, and includes full electric adjustment and heating, and a massage function for the driver. It all looks very nice indeed and a construction quality is good. However, I did find the seat base bolsters too tight over longer journeys; nipping into the side of my thighs. And my thighs really aren’t very thundery at all.

Items of joy include the full-length sunroof; complete with electric blind, a decent-sounding stereo and plenty of space front, rear and above.

The drive:
With up to 200bhp on tap – 163bhp diesel; front wheels, 37bhp electric; rear wheels – the all-wheel-driving Peugeot 508 RXH should be quite a potent performer. In the end it is, and it isn’t.

The Hybrid4 system has a control dial on the centre console featuring options for Auto, Sport, ZEV (electric-only) and 4WD. In normal Auto mode the car mixes the diesel and electric drives for best economy and it all works well enough for unhurried cruising, with the 6-speed automatic gearbox sometimes feeling a little slow on the uptake at times.

You can, however, flick the gears up and down with the paddles behind the steering wheel to make sure you have the revs and therefore torque that you need for quicker manoeuvres.

I found the Sport mode to be the most responsive – although not the best for economy – and if I thought I’d be needing a bit of decent squirt in the coming road-moments – like a fast pull away, for example, then I’d flick to Sport. This maximises engine and motor punch, with the torquey electric motor giving the RXH instant shove away from the lights, before the diesel motor and auto ‘box have even woken up. A kind of anti-lag, if you will. In this mode the 508 is lively; in Auto mode the driving experience is more ponderous. The all-wheel drive option would come in useful in snowy conditions, mind.

With the batteries full the 508 will roll around silently in electric-only mode, but as soon as you need anything more than pedestrian acceleration, the diesel engine has to rumble into life. Using the car mainly in Auto mode I saw around 47mpg over 300 miles of mixed driving, and that’s not very close to the quoted combined figure of 68.9mpg.

The RXH drives reasonably quietly – unless under full diesel-powered acceleration – but the suspension is very firm and the car carries a lot of extra battery weight. You’ll feel the extra heft during more ‘sporting’ moments, and this, with the ponderous automatic gearbox, may well mean that most drivers stick to the cruising side of life. Still, that’s a driving style that’s best for economy.

Ten second sum up:
The Peugeot 508 RXH isn’t cheap but it is premium-feeling inside and out, while its 107g/km CO2 rating is entirely aimed at business users and should satisfy their natural urge to legally pay less tax. It’s not the perfect car from a weight and sluggish transmission point of view, but it is a money-saver and grippy four-wheel-driver.